Audiovisual identity for Badalona Comunicació, the television channel of one of the largest and most populated cities in Catalonia. For the development of branding we worked with Forma, who was responsible of the graphic design and general concept: closeness. As a local television channel that is focused on their inhabitants, we were looking for a human, transversal and open approach, which in turn had a graphic and audiovisual response.

As the most iconic way to represent the concept of closeness, zoom is present in all applications.

Another graphic resource used is the pinching of text, which provides a sense of proximity.

The proximity game is also used correlatively to distances.

For the opening of the news, an emblematic application of any television channel, we decided to take a chronological journey. Traveling in this way through the history of Badalona, ​from the past to the present.

In Badalona sports are of paramount importance, especially basketball. For the different openings of sports programs we added a graphic stroke to the typography that imitates the lines of a basketball field.

The four pieces of promotion for the channel itself respond to three large totems of the culture from Badalona, as well as representing the wide variety of its citizens: the gypsy ethnic groups from the outskirts, the famous factory of Anís del mono, basketball and youth, and the elderly. For these pieces we were more focused on abstraction and aesthetic delight. Slow cameras, continuous approaches, macro images and dreamy music.

For the sound and music we worked together with BSO. We wanted to get away from the frantic sounds, which invade the openings of national news broadcasting. With this in mind, BSO created all the music and sounds, from news and sports programs, to details such as the separations between sections and promotions of the programs. The whispers, the way in which we interpreted a sound approach, enriches the music, giving it the touch of originality that we were looking for. 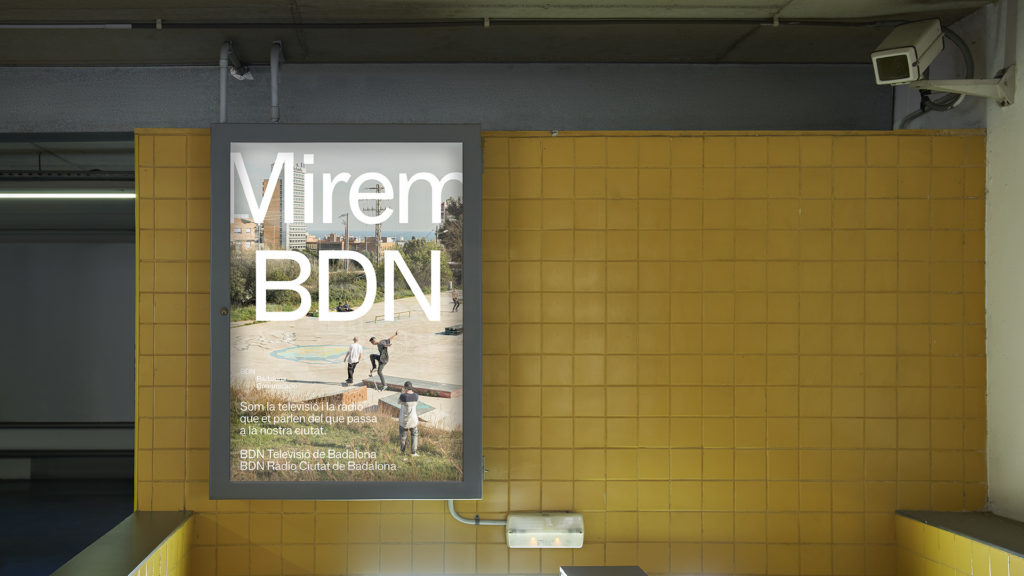 To promote the new image of the channel, we made a graphic campaign together with Forma, which invaded the streets of Badalona during the weeks prior to the launch and during its broadcast. Because Apropem BDN governs the entire campaign, we decided to decline the concept to similar derivations and we continued with Mirem BDN, Escoltem BDN and Descobrim BDN. For the development of the campaign, we collaborated with the photographer Anna Huix.